One thing cults have in common is that they have some leader, whether alive or dead, whom they declare to be some paragon of truth. We have Ellen White, Mary Baker Eddy, Joseph Smith, an interminable list of popes, Victor Paul Wierwille, David Koresh. It is a long list, and adds more every day.

The Bible tells us how to resist even the most charismatic cultist: "Learn by us not to go beyond what is written, that none of you may be puffed up in favor of one against another" (I Corinthians 4:6). This is the Apostle Paul speaking, someone to whom the word of God was entrusted (I Thessalonians 2:13). If anyone could claim personal superiority, surely it was he. Yet, he tells the Christians of Corinth that mere men can be "puffed up." And the cure for that is not to go beyond what is written. That is, when any man claims spiritual knowledge outside of Scripture, then he is "puffed up," and is to be resisted. While he does not explicitly quote it, Paul is applying the principle taught in God's Law (Deuteronomy 18:20): "The prophet who presumes to speak a word in My name that I have not commanded him to speak, or who speaks in the name of other gods, that same prophet shall die."

This is what the Reformers did, starting in 1517. As they discovered and taught, more and more, that the declarations of the popes went beyond anything written in the Bible, people were liberated from hundreds of years of bondage to the erroneous teachings of men. Martin Luther said of the fathers of the Catholic Church, "Their holiness does not make them infallible, and it does not imply that one must rely and depend on all the dicta of the fathers or approve and believe all their teachings. Rather take the touchstone of God’s Word into your hands. Let this be your criterion for testing, trying and judging all that the fathers have preached, written and said, as well as all the precepts and human ordinances that have been promulgated. Otherwise one will be easily misled and deceived. And since this polishing stone was not applied to the pope in times past, he ran rampant and covered the church with errors."

It was in the Bible, not the teachings of the popes, that Luther learned that "the righteous shall live by faith" (Habakkuk 2:4, quoted in Romans 1:17, Galatians 3:11, and Hebrews 10:38). Suddenly, his conscience was freed. Having been a monk who spent hours in confession, and, yet, could find no relief for his conscience, he was transformed into a joyful Christian, who could now say, "If you try to deal with sin in your conscience, let it remain there, and continue to look at it in your heart, your sins will become too strong for you. They will seem to live forever. But when you think of your sins as being on Christ and boldly believe that He conquered them through His resurrection, then they are dead and gone. Sin can’t remain on Christ. His resurrection swallowed up sin."

False teachings have one consistent effect: they bring a man into bondage to a man or an organization. Sola Scriptura liberates a man through true knowledge. As Jesus said (John 17:17), "I am the way, and the truth, and the life. No one comes to the Father except through me." Scripture points a hopeless soul to Jesus. The teachings of men will point you to those men.
Posted by Chris Cole at 9:30 AM 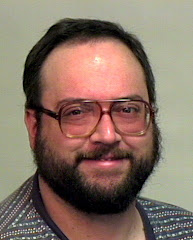 About Your Host and Commentator

Chris Cole
Huntersville, North Carolina, United States
My name is Chris Cole. I have lived in the Charlotte, NC, area for over thirty years, and have been an active Presbyterian during most of that time. I love the Westminster Confession of Faith as a beautiful expression of my own personal beliefs. You can email me at orthodoxreformed@mail2world.com. I prefer the English Standard Version of the Bible, and all quotations are from the ESV, unless otherwise stated. I have a number of reviews of Reformed books on Amazon. There is a link to them in the Reformed links below.

Online Bible by Logos
Add this to your site!